Congratulations to ECISD volunteer Debbie McReynolds on being named the Hero for Students award from the State Board of Education (SBOE). Debbie was recognized with the other regional winners during the SBOE meeting in Austin on September 2. She is one of just 15 people to earn this prestigious distinction which is given annually to one representative from each SBOE District.

Debbie has been volunteering in Ector County ISD for eight years. She began after her retirement from the City of Odessa as a lab tech. She found the perfect place for herself at Hays STEAM Academy where she operates the school’s science lab. She cleaned it up, organized, inventoried and labeled everything in it. When teachers sent her a lesson plan, Debbie pulled all the materials and supplies, cleaned up and reset for the next class rotation.

She led Pre-K students through science lessons on Fridays. Hays STEAM Academy scholars enjoyed learning about weather and making snow in a jar. They still talk about it. She also set up a rock exploration lab with several stations. Debbie made a tremendous impact in scholars’ lives by providing science lessons that are fun, engaging and meet TEKS standards.

She also played a vital part assisting in the Sharkfinder program at Hays, Dowling, Johnson and Gale Pond Alamo Elementary Schools.  She worked directly with students using science tools as they worked through the paleontological process, which included sieving through ancient marine sediment using digital and stereo microscopes to make observations. Students contributed to real scientific research, and they were excited to identify shark teeth, fossils and other specimens.

When asked, ‘why volunteer?’ Debbie replied, “When I receive the appreciation of our overworked teachers who might not otherwise be able to give their students hands-on lab experience, I know I have made their tasks a little easier.  When I volunteer in the office and see just a little of what must happen to make a school not only function but be an amazing school, I grow in my admiration for those who are responsible for the day to day operations.   When I work with the wonderful, creative, dedicated young women who also volunteer at Hays, I am blessed by their hearts for the children at Hays, their desire to make the tasks for the teachers and administrators easier, and the example of volunteerism they are passing down to their children.  So why do I volunteer???  The better question is why would I or anyone else rob themselves of the blessings associated with volunteering!”

Debbie McReynolds is the third ECISD volunteer to win this award in the past 10 years.

The SBOE Heroes for Children Award was established in 1994, and is designed to recognize excellence in advocacy for education and to highlight the many outstanding volunteers whose efforts represent significant contributions to public school education in Texas.

Pictured: Debbie McReynolds with her award, standing with SBOE District 1 representative Georgina Perez; and seated with other Hero award winners from around the state. 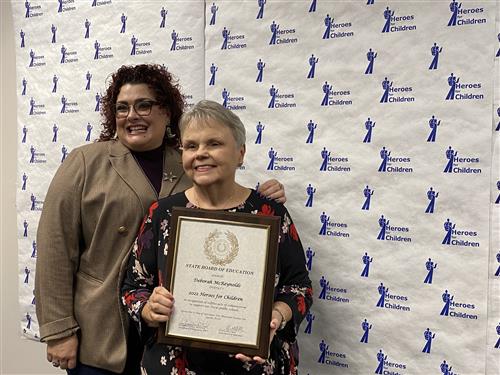 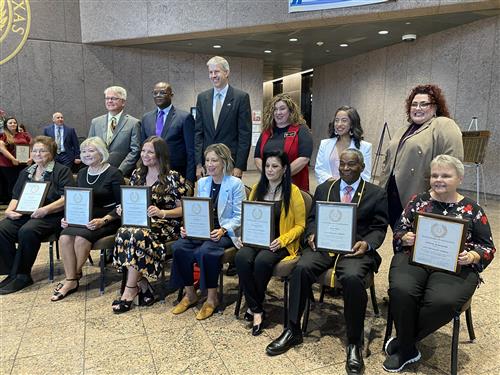